It’s funny how easy it is to find information you aren’t looking for. A few weeks back Stephen Bennett (b) linked to my post Comparing Two Query Plans. Since I always find that interesting I followed the link and wound up at his post 3 Reasons to ❤ SSMS 2016. In he mentioned three really cool features of SSMS 2016.

So what do we mean by a pinned tab?

– The tabs in SSMS now have a Pin. By pinning one or more tabs it breaks the tabs into two groups. The tabbed and the untabbed. The tabs can be moved around like normal but only within their own group. Normally the pinned tabs stay to the left of the unpinned tabs. However, there is a setting that will move the pinned tabs into their own row. 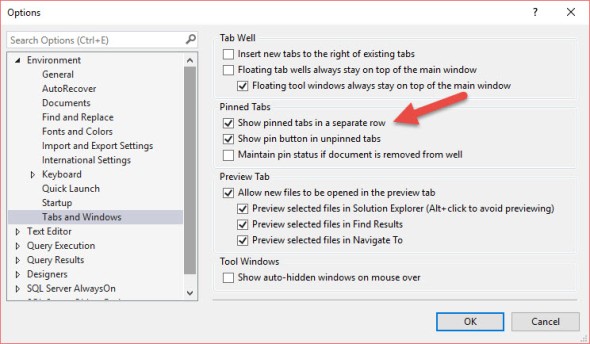 Now instead of a single row of tabs there are two rows.

This can be particularly handy when you have a handful of tabs for a specific project and then the rest of the tabs which you are using for regular work. Of course it’s possible that not everyone leaves dozens of tabs open at once. Naa. Everyone does it right?